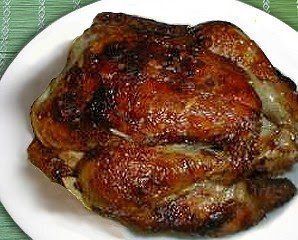 Mexican chickens will positively spoil you forever. Big, fat golden-skinned birds, they make the chickens you buy in US stores look like pale anemic cousins that ought to be embarrassed to even call themselves chickens. And they taste so darn good, too!

Chicken is a popular food all over the world, and Mexico is no exception. Of course there are many recipes for chicken dishes, but the one that is most ubiquitous throughout the country-- found in every town and sold from roadside stands everywhere-- is the following recipe for Pollo Asado (roasted chicken). If you have ever had the pleasure of eating at Pollo Lucas in Puerto Penasco, then you have enjoyed a version of this recipe.

This particular recipe is called Pollo Asado al Carbon ("al carbon"="to the coals"), as it is grilled over medium hot coals. It was raining the day I took the picture above, so I put the chicken on a rotisserie inside and it was delicious that way, too. But with warm weather coming, you'll want to heat up the grill and do it the traditional way.

Note that this recipe calls for indirect grilling in order to keep the chicken juicy. You'll want to let your charcoal burn down until it's covered with white ash (medium hot) and then push it to the sides in equal amounts. The center of the grill, where the coals have been removed, is where you will roast the chicken. If you use a gas grill, you'll need one with 3 rows of burners so you can put the chicken in the middle and only fire up the outside ones to medium. 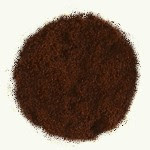 A word about ancho chile powder: The ancho is the sweetest of the dried chiles, and ancho chile powder adds a very nice depth of flavour without any real heat. It gives the chicken a smoky red color, but does not overpower the other ingredients. You should be able to find it in any Mexican grocery store, as well as in the spice section of major supermarket chains in the USA. Not ALL recipes for Pollo Asado call for this ingredient so if you don't like it or can't find it, just leave it out. If you choose to leave it out, also leave out the cumin and marinate your chicken for at least a couple of hours; it will turn out more like Sinaloa style, which is not a bad thing!

And here's the recipe:

In a small bowl, mix all ingredients together. Set aside, and start the charcoal. Follow instructions given above for preparing the grill.

This is the fun part. You can cut the chicken in half and roast the halves, but it looks fancier and stays juicier if you follow these steps.

1. Flip the chicken onto its breast.

2. Using kitchen shears or sharp knife, cut through the back as close to the backbone as possible (you want to keep as much skin intact as possible) The two halves will still be connected in the front of the chicken.

3. Flip chicken back over, breast up, and give it a mighty wallop on the breastbone to break it free so the two halves will lie flat.

4. Tuck wing tips securely behind the back. Tie drumsticks together close to the body, or at least make sure they are turned inward.

5. Smear the chicken all over, on both sides, with marinade and let rest until the grill is heated.

6. Place the chicken in the center of the grill, where the coals have been removed per instructions above, and roast without turning for about 45 minutes, or until juices run clear when thickest part of thigh is pierced with a fork. You will want to add more charcoal every 20- 30 minutes to keep the temperature in the grill at about 325 degrees, and baste the chicken with marinade every ten minutes. Just before the chicken is done, flip it over onto its breast for additional browning if desired.

7. Remove to a platter, cover loosely with foil, and let rest for 10 to 15 minutes. This allows the chicken to absorb the juices so they won't all run out when you cut the chicken up. Show the chicken off to your family/guests in all its glory before cutting it into pieces to serve.

Serve with fresh tortillas, the salsa(s) of your choice, beans and/or rice and roasted corn on the cob seasoned with chile and lime and slathered with butter (and/or mayonnaise, if you want to be authentic).

Twenty years from now you will be more disappointed by the things you didn’t do than by the ones you did do. So throw off the bowlines. Sail away from the safe harbor. Catch the trade winds in your sails. Explore. Dream. Discover. -Mark Twain